Power for the small pumps used for private water supplies is developed by hand, windmill, hydraulic energy, gasoline, gas, and sometimes hot air. Steam and compressed air are seldom used in very small supplies. Electricity is frequently used for the transmission of power and the operation of pumps. 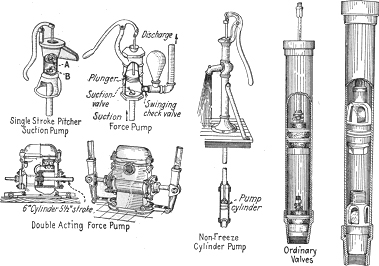 Hand-operated pumps Some types of hand-operated pumps are illustrated. The single-stroke pitcher pump operates as follows: When the handle is pressed down the plunger A rises; the plunger fits so closely to the walls of the cylinder that a vacuum is created in the chamber below causing the lower valve B to open to admit water. The rise of plunger A also forces water out of the top of the pump. As plunger A descends, valve B closes, preventing the escape of water into the well and leaving the barrel of the pump filled with water some of which will be discharged on the next up-stroke of plunger A. The plunger A is shown descending in the figure. In the maintenance of these pumps difficulty is sometimes caused by the wearing of the packing on the moving plunger, or leakage through the valves, or the catching of some object in the pump so as to hold the valve open. When the packing becomes worn or the valves leak, the pumps will not prime themselves. They can be primed by filling the pump barrel with water so as to cover the moving plunger, or the packing and valves can be repaired so as to make the pumps self-priming. These pumps will seldom lift water by suction to any appreciable height. They should, therefore, be installed with the plunger submerged. The capacities of hand-operated pumps cannot be expected to exceed 5 gal. per minute under normal operating conditions. Such pumps are used in shallow wells and cisterns.
Hand- or power-driven well pumps The pitcher pump shown above is known as a single-stroke pump. Water will be delivered only on the up-stroke of the valve. This results in a discontinuous flow of water from the pump. When pumps are power driven greater efficiency can be secured by maintaining a smoother and more continuous flow from the pump by maintaining discharge on both the up- and down-stroke of the valves. This can be accomplished, with more or less success, by the use of Such devices are more commonly used on power-driven pumps, but are occasionally found on hand-operated pumps. Air chamber An air chamber can be used only on the discharge pipe of a force pump which is discharging water under pressure. Air chambers are most effective on single-acting pumps. When water is being discharged from the pump air is compressed in the chamber. When the discharge valve closes, as on the return stroke of a single-acting pump, or the rate of discharge slackens, the compressed air in the pump expands and discharges the water which had previously entered the chamber, thus aiding in the maintenance of a continuous rate of discharge. The capacity of the air chamber should be about three times the volume of water discharged on the up-stroke of the pump. The larger the chamber the smoother will be the action of the pump. Air must occasionally be supplied to the chamber as it is absorbed or carried away by the discharge water. Air can be admitted to the chamber by draining the water out when the pump is not operating, or a small valve on the suction side of the pump can be opened when the pump is operating. The air admitted in this manner is caught and retained in the air chamber.

Differential plunger pump A differential plunger pump is shown. In its operation water is discharged on both the up- and down-strokes of the pump, but it is sucked in only on the up-stroke. It operates as follows: As the differential plunger A and the valve B move upwards water is drawn into chamber D through valve C. Valve B is closed and some of the water in chamber E is discharged from the pump. It is not all discharged because some must remain to Ill the space previously occupied by plunger A. On the down-stroke valve C is closed and there is no intake of water. The water in chamber D passes through valve B into chamber E from which a portion of it is forced by the entering plunger A. For smooth operation the size of the differential plunger should be such that the amount of work on both strokes is equal.

Two-stroke pump A two-stroke pump as shown, consists of two single-stroke pumps, one within the other, with independent rods. It operates as follows: Pump rod D is solid and moves within the hollow rod C. The rods C and D move in opposite directions, one moving down as the other moves up. As D moves up valve B is closed and the water in chamber E is discharged through valve A, one-half of it being discharged from the pump. As rod C moves up the water which has previously passed through valve A is discharged from the pump and the chamber E is refilled through valve B.
Double-acting cylinder pump A section through a double-acting cylinder pump is shown. A and C represent fixed partitions across the working barrel. F and H are check valves in these partitions. B is a moving partition, or plunger, attached to the pump rod D. E and G are check valves over the channels passing through the pump rod. On the down-stroke F and H are closed; E and G are open. Water is being drawn into the pump through J and is being discharged through E. On the up-stroke E and G are closed; F and H are open. Water is being drawn into the pump through H and is being discharged at F. A disadvantage of the double-acting pump is evident when long rods are used. The thrust of the downstroke tends to bend the rods against the sides of the well. It has an advantage over the two-stroke pump, however, in that water is both taken in and discharged on both strokes of the pump.
Hot-air engines Hot-air engines for driving pumps are adapted to cold climates and to localities where fuel is cheap and no other type of motor can be used with ease. They are seldom used in populous districts. Engines are available with capacities between 150 and 2,800 gal. per hour, with a lift not greater than 50 to 75 ft. Hydraulically and pneumatically driven pumps Hydraulically driven pumps are used where two water supplies are available, one of relatively poor quality at a high pressure and the other of good quality at a relatively low pressure. This condition exists in localities where the public water supply is hard in quality and it is desired to raise soft rain water from cisterns to roof or attic tanks. The pump is driven by the hard public water supply. The hard water used for driving the pump may be run to waste or it may be made available, at a much reduced pressure after it has passed through the pump, for flushing fixtures, cooking, or other purposes.
A section through one of these pumps is shown. In the figure high-pressure water is entering the pump through pipe A; pistons P1 and P2 are moving to the right; and soft or pure water is being discharged from pipe J. The slide valve is open at A to admit water to chamber K, and the valve at B is open so as to waste water from chamber M at the same time preventing its escape from chamber K. The poorer quality of water is wasting through D. The valve at G is open so as to admit water of good quality to chamber N. The valve at L is open so as to permit water to escape from chamber S. When the stroke is completed the position of the valves is reversed by a mechanism attached to the moving piston rod and the pistons move to the left drawing water into chambers M and S, discharging it from chamber N, and wasting it from chamber K. The pressure and volume of water required to operate such pumps depend on the height and quantity of water which is to be lifted. Under ordinary conditions the efficiencies of these pumps cannot be expected to exceed 50 per cent, and the areas of the pistons and the stroke of the pump should be designed to fit the conditions to be met in service. Pneumatically driven pumps operate on the same principle as the hydraulically driven pumps, compressed air being used instead of water to actuate the pump. Such pumps are seldom used for household supplies as they are suitable only where compressed air is available at a low cost for the transmission of power.
Power-driven pumps Power-driven pumps, or, as they are more commonly known, power pumps, are driven by gasoline engines, electric motors, or some less-frequently used motive power. They are connected to the motor by means of belt, gears, or shafting. Belt connection makes possible ease in the adaptation of motors and pumps of diverse speeds but the space occupied is greater than for other forms of connection. Gears assure positive operation of the pump but they are sometimes noisy, require constant lubrication, and are so inflexible that a sudden stoppage in the discharge pipe will result in rupture of some part of the pipe or mechanism. Direct-connected pumps and motors on the same shaft give the most efficient driving mechanism between the pump and motor but they necessitate the use of a pump and motor of the same speed. It consists of three reciprocating single-acting water cylinders. Such pumps have a long life, will give excellent service, are suitable for varying loads without material variations in efficiency, and are self-priming. They are noisy and require attention and lubrication. They must be secured to a firm foundation and care should be taken in the location of the suction pipe to avoid bends, sags, and air pockets. The discharge pipe should be equipped with a gate valve and a check valve, the latter being nearer to the pump. The mechanical efficiency of belt-connected triplex power pumps is about 65 to 75 per cent, the efficiency of the belt alone being about 95 to 97 per cent. The efficiency of geared connections is about 87 to 93 per cent.