Shutting off the Water

Shutting off the Water 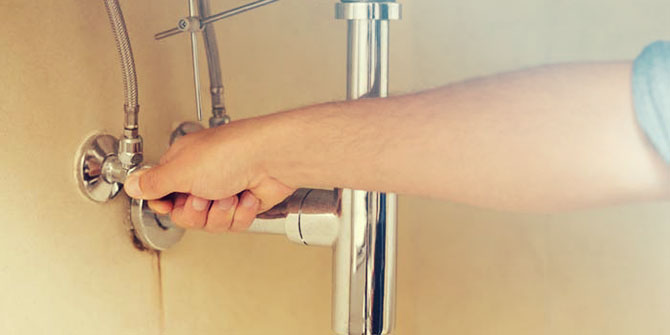 It is important to know where and how you can shut off the water supply for your home. In case of emergency, knowing how to shut the water off can prevent a problem becoming a disaster.

All able members of the family should know where valves are and in what direction they are to be turned.

If your home has numerous valves and your plumbing system complex, a tag or some paint can be used to identify separate valves. Valve charts can be employed for houses with several bathrooms.

The most important valve in the home will shut off the main water supply for the whole plumbing system. This valve is often situated on the same house side as the water meter, and may be found under the kitchen sink or stairs, or in the basement/cellar.

As the valve is not in frequent use, it is a good idea to lightly lubricate around the valve handle one or twice annually. This will prevent it sticking from corrosion and being hard to turn for older or younger members of the household.

As well as the main shut off valve to the water supply, many houses have separate stopcocks for individual appliances like water heaters and washers. These will be located near the appliance on the supply lines below, and allow for easier repairs without affecting the rest of the house.

Water supplied to the house is delivered with quite high mains pressure. Drinking water to the kitchen sink is usually fed from the rising mains of the cold water storage cistern. Other taps and fittings receive an indirect supply by a low pressure gravity-fed system.

If your hot or cold tap runs from the cistern, there will be a mini stopcock by the cold water tank. With this turned off, taps can be turned on to drain the remaining water.

For centuries, Calgary plumbers have been performing a vital role in society, working to protect the health and prosperity of mankind by ensuring the safe and efficient supply and disposal of water.

The term “plumber” derives from the Latin “plumbarius”, meaning “lead worker”. Romans worked lead into early examples of pipes, baths and storage cisterns. It was not until the industrial revolution of the late 18th century that plumbing emerged as an important tool in the fight against disease, as rapid urbanization led to sharp increases in deaths caused by water-borne epidemics.

Rapid advances in plumbing technology have enabled today’s plumbers to meet the needs of the modern world, with its ever-expanding population and growing health and lifestyle expectations. The work of plumbers and plumbing designers now extends beyond water supply and sanitation to encompass the supply of gas, as well as air conditioning and refrigeration.

In the 21st century, the World Plumbing Council defines plumbing as “work associated with the provision of water supply pipework including, without limitation, that used for fire-fighting; all forms of space heating; gas installations; sanitary appliances; discharge pipework and drainage; the weathering of structures and buildings.”

Plumbing professionals are essentially involved in the application of hydraulic engineering principles to convey fluids to and from fixtures within a building or vehicle.

At Mr. Mike’s Plumbing in Calgary, it’s our duty to provide you immediate plumbing help.