Taps and fittings in Calgary NW

Taps and fittings in Calgary NW 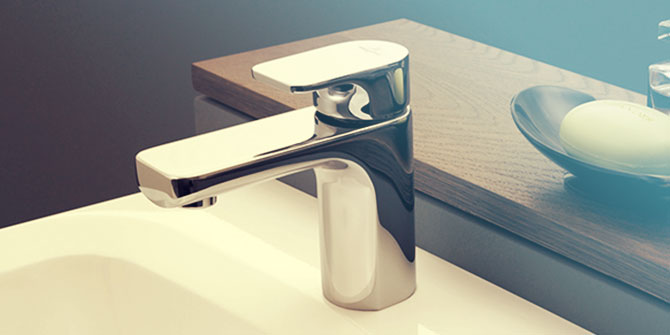 For long lasting taps and fittings in Calgary NW, chrome plated brass should have a lifetime of use, andclean easily with simple soap and water.

If you are considering polished brass fittings and trim, these can last just as well provided the right precautions are taken. Never use an abrasive cleaner on polished brass taps and fittings. This can scratch the coating, which will damage and/or pit the brass plating. Solvent based cleaners should also be avoided as they can over time begin to wear away the polished brass finish.

However good your taps and fittings area, due to internal wear and tear they may still be susceptible to leaks. A leaking tap is not just a small inconvenience; it is extremely wasteful and should be dealt with immediately. A tap leaking 60 drops a minute will waste 2,299 gallons of water every year. Moreover, a dripping tap can stain your bath or sink, and permanently damage the tap seating.

Taps can come in four types: compression, disc, cartridge and lever. The latter three are also referred to as washerless taps. They usually have just one handle that is flipped up and down. Repairs for these taps are very brand-specific, so if you require replacement parts you should take the tap with you to the store.

With washerless taps, the water flow is controlled by a replaceable cartridge, or seals arranged to allow the water through aligned holes. For this design therefore, twisting the handle even harder will not be effective in stopping the leak.

Due to the way washerless taps are designed however, they are less likely to start dripping as their parts are less exposed to friction.

For lever taps of this variety, the most common problem is that the interior ball needs replacing. There are kits that you can buy that provide you with everything you need.
On disc taps, the rubber seal is easily and cheaply replaceable, while on cartridge taps, it will either be the cartridge itself or the O ring. As the tap will be disassembled regardless, it is worth replacing both these parts at the same time.

Compression taps are the traditional standard twist on and off taps. If you are experiencing a leak here, it is likely that the washer is at fault.

To fix a leak in a conventional compression tap, first remove the cross head by unscrewing it, and then unscrewing the shroud below to expose the tap’s mechanism.

Above the tap body is the headgear nut. Hold the tap firmly and unscrew the nut to lift the headgear part from the body. The washer will be at the base of the headgear assembly; make should that you replace it with the correctly sized part.

Before replacing the headgear, check the condition of the tap seat which is inside the tap body. If there has been friction of the washer against the seat, the new washer may not solve the leaking tap. You can purchase a reseating tool, or fit a new plastic seat over the worn out one.

In the case of modern disc taps, in place of the rubber washer is a ceramic disc. If you experience a leaking tap in this instance, it is necessary to fit a whole new disc cartridge. However, these taps are built to be more wearing and so are less likely to cause leaking.