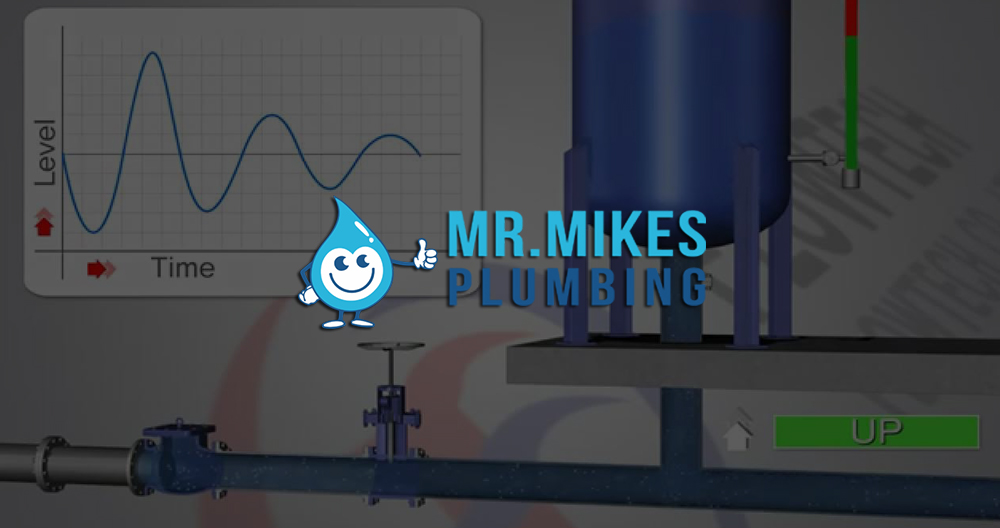 Water hammer is caused by the sudden stoppage of the flow of water in a pipe or other closed conduit. The most probable causes of water hammer are the sudden closing of self-closing faucets, quick-closing valves, or other methods of quickly shutting off the flow of water. The effect of water hammer is a sudden increase in the pressure which may be accompanied by a knocking sound in the pipe. The intensity of the noise is not a measure of the pressure produced.

Water hammer is not a series of sudden blows but is a series of pulsations of pressure above and below normal, the periodicity of the pulsations depending on the size and length of the pipe and other factors.

The fluctuations will continue, each change being less than the preceding, until the waves of pressure are damped out by friction. The time that the pressure gage remains at the high or low points is determined by the time it takes the pressure wave to pass to a point of relief and to return to the gage. The velocity of the wave is equal to that of sound in water which is about 4,800 ft. per second.

Methods of avoiding or curing water hammer include: the use of air chambers, the use of mechanical compensating devices, and the use of slowly-closing faucets. The use of pressure-reducing valves or the installation of large-sized pipes is also helpful.

Air chambers should be installed near to the valve which is causing the water hammer, and, if possible, in a vertical position over a riser pipe The air chamber should have a capacity of at least 1 percent of the total capacity of the pipe line in which the water hammer is occurring. The purpose of placing the chamber in the position shown in the figure is twofold: first, because air in the riser pipe will be trapped in the chamber, thus aiding in keeping the chamber full of air; and second, it will receive the full thrust of the pressure from the vertical pipe line and will thus be more effective in its operation. Provision should be made for renewing the air in the chamber. This can be done by the use of a stop-and-waste valve and a pet cock or larger valve.

A mechanical compensating mechanism operates on a similar principle to the air chamber except that the cushioning effect is supplied by a coiled spring within the chamber instead of by compressed air. Such a mechanism usually requires no attention for maintenance.

The use of large-sized pipe will also cut down the velocity of flow but to determine the exact size necessary to reduce the water hammer to any particular amount would require tests of an existing installation and knowledge of mechanics and hydraulics.